“If I waited it might have been too late” 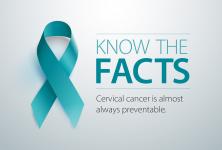 In January 2017, Christina Bobier’s family doctor suggested she get a Pap test during a routine appointment and offered to do it that day. As a busy single mother with a fulfilling career and two teenagers at home, she agreed to do the test. It would be one less appointment to schedule into her already full calendar. She didn’t know it then, but that seemingly small decision just may have saved her life.

Several weeks later, Christina received a call from her doctor - the results of her Pap were in. The test showed abnormalities, and he was going to refer her for further testing just to be sure. “He reassured me that everything was ok, and there was nothing to worry about,” Christina remembers. Despite her doctor’s reassurance, the uncertainty left her feeling uneasy.

Christina was referred to the Colposcopy Clinic at St. Joseph’s Hospital in London, where she was monitored closely at six-month intervals to ensure the abnormal cells didn’t progress or change. It was January 2019 when her doctor, Dr. Rob Di Cecco, started to note changes and wanted to take a closer look with a biopsy. A few months later, Christina received the news that a tumor was growing, and she was diagnosed with cervical cancer.

October 21 to 25 is National Cervical Cancer Awareness Week, an opportunity to share stories like Christina’s and remind people about the importance of staying up-to-date with regular cervical screening.

“Cervical cancer screening certainly isn’t glamorous,” acknowledges Dr. Robert Di Cecco, who is the Regional Cervical Lead for the South West Regional Cancer Program, “but it only takes a few minutes, and Pap tests can be lifesaving.”

A Pap test looks for abnormal cells in the cervix. Sometimes cervical cells become abnormal over time as they die and then renew, or when they have become infected by the human papillomavirus (HPV). Abnormal cells can often return to normal without any intervention. But if not, they need to be found and, if necessary, treated. Otherwise, they may slowly progress to cervical cancer over several years. HPV is passed from one person to another through sexual activity, which includes intercourse (sex) and digital (using the fingers) or oral (using the mouth) sexual activity involving the genitals with a partner of any sex. HPV infections are common, and up to 80 percent of sexually active people will have an HPV infection in their lifetime.

Cervical cancer can affect anyone with a cervix who has ever been sexually active. The OCSP recommends that people should go for cervical screening even if they:

Despite its success, the Pap test isn’t perfect. There is still a possibility that abnormal cells are missed, but according to Dr. Di Cecco, regular screening significantly decreases the risk of missing those important changes. “Screening is a really important part of the picture,” Dr. Di Cecco says, “but it’s equally important that women pay attention to their bodies and notice when they are experiencing unusual symptoms.” Dr. Di Cecco recommends women who are experiencing unusual pain, abnormal bleeding, or discharge see a doctor – even if their last Pap test was normal.

Because her Pap test detected abnormal cells, and she was monitored closely, Christina’s cancer was caught early, when the tumor had just started to grow. She made the personal decision to undergo a preventative hysterectomy and was officially declared cancer-free in June. “Screening is what saved my life,” she says. “If I waited, it might have been too late.” Though she still has a long way to go on the road to recovery, Christina is easing back into her routine and doing the things she loves. One of which is competitive swimming, and she hopes to compete in the Masters Swim Ontario regional competition in Ottawa sometime next year.

For more information on cervical screening, visit www.cancercareontario.ca/ccaw. To find a clinic offering cervical screening in your community during Cervical Cancer Awareness Week, visit the Federation of Medical Women of Canada.